Vietnam Says It Has Detected a New Coronavirus Variant

The country’s health minister cited lab evidence in discussing the transmissibility of the newly identified variant, but much remains unclear about its prevalence and perils.,

LIVECovid Live News: Updates on the Virus, Vaccines and Variants

Vietnam says it has detected a more contagious hybrid of variants first seen in India and Britain.

By Elian Peltier and Gina Kolata

Vietnam has discovered a new variant of the coronavirus that the country’s health minister said was a mix of the variants first detected in India and Britain and was also more contagious, according to news reports.

Nguyen Thanh Long, the health minister, said in a government meeting that the new variant combined the variant discovered in India with mutations from the one initially detected in Kent, England.

“The concentration of virus in the throat fluid increases rapidly and spreads very strongly to the surrounding environment,” Mr. Long said at the meeting, a recording of which was obtained by Reuters. He called the variant “very dangerous,” Reuters reported.

It was not immediately clear how fully the new variant is understood. Mr. Long cited lab cultures in discussing its transmissibility, but they may not necessarily reflect how the virus behaves in real-world situations. It was also not clear whether its prevalence is known or whether it might evade the protections afforded by vaccines or natural immunity acquired through earlier infection from a different version of the virus. Viruses mutate constantly, but most of the mutations dwindle away.

The variant detected in India, known as B.1.617, is believed to be more transmissible, the World Health Organization said this month, citing a study that had yet to be peer reviewed, and it could be more resistant against antibodies from vaccines or previous infections, according to the organization.

That variant has been spreading in Britain and now accounts for most of the new cases detected there.

Vietnam, a nation of around 97 million people, has been credited for its forceful approach to containing the virus, having recorded only 6,856 cases and 47 deaths since the beginning of the pandemic. But it has faced a surge of cases in recent weeks, with more than half the country’s total cases reported this month. Only 1 percent of the population has been vaccinated, according to a New York Times database.

At least 85 people tested positive as part of a cluster at a Protestant church in Ho Chi Minh City, the Health Ministry said. Worshipers sang and chanted while sitting close together without wearing proper masks or taking other precautions, according to The Associated Press.

Vietnam subsequently ordered a ban on all religious events nationwide, and major cities have prohibited large gatherings and shut down nonessential business including in-person restaurants, bars, clubs and spas. 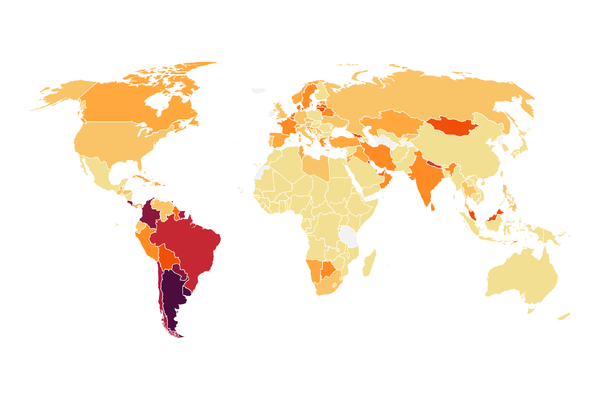 The virus has infected and killed millions of people around the world. See detailed maps and charts for each country.

Rodrigo Duterte Threatens to Jail Anybody Refusing a Vaccine