A Siege, a Supply Run and a Descent Into a Decade-Old Battle

“Do you have body armor?” the Afghan pilot asked us as we prepared for a trip to outposts surrounded by the Taliban.,

MARJA, Afghanistan — The Afghan pilots discussed the approach into the small cluster of forward operating bases in Afghanistan’s south over tea and a lunch of rice pulao, much like surgeons discussing their next procedure. It would be quick, no more than 40 seconds on the ground, both helicopters landing at the same time, unloading the supplies before yanking up fast to get away from the easily targeted landing zones.

“Do you have body armor?” one pilot asked another Times journalist and me.

A flight of small gunships formed up alongside as we approached the first base, once called Camp Hanson after a U.S. Marine who was killed there in early 2010. It’s now known as Kem bazaar, but a decade later, the Taliban are still close.

Dropping altitude rapidly, we banked hard before flaring and touching down. The helicopter’s crew threw the supplies out the open doors, the rotors pushing up dust and sand.

Just as the last goods were being disgorged, a barefoot man jumped aboard, likely a police officer stationed at the base. He carried nothing with him, darkly tanned in a brown T-shirt, disheveled and looking half-mad and panicked. It seemed like he had been marooned on an island and we were his rescue. We weren’t.

A soldier unloading the supplies grabbed the man as he screamed, though his cries were inaudible over the blast of the rotors. The soldier wrestled with the man before the helicopter crew member sent them rolling out the door. The aircraft pulled off the ground in a rush of air and speed, skimming the roofs of nearby houses before catapulting upward. The whole thing took about 60 seconds.

I first arrived here in Marja as a 22-year-old Marine corporal during one of the American war’s earlier chapters, when the U.S. military still thought it could beat the Taliban into submission enough for the Afghan security forces to take over the fight. There are no Americans at these bases anymore, and barely any in southern Afghanistan, as the United States military prepares to leave by September (though it could be earlier). 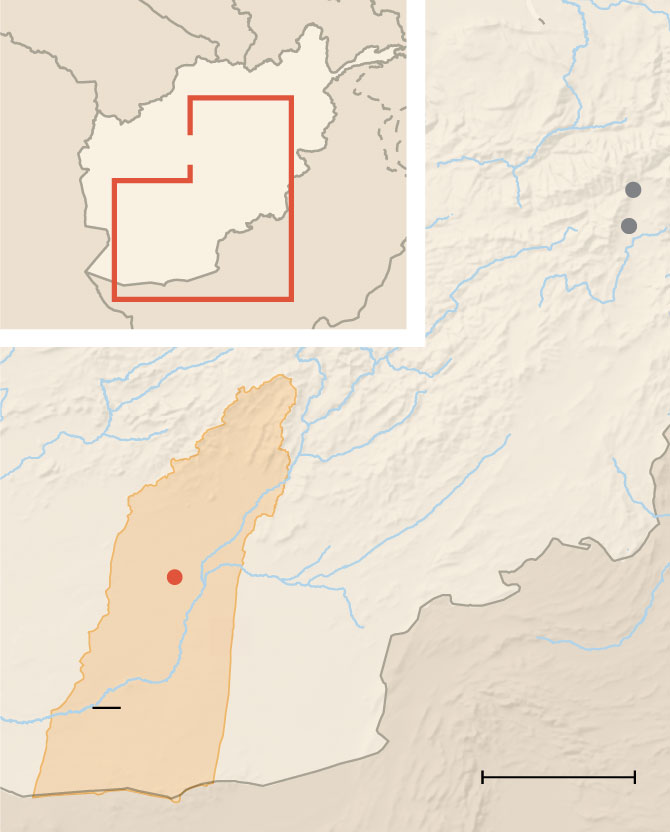 Marja today is nothing like what American military officials envisioned so many years ago. It’s a microcosm of failed counterinsurgency strategies, abandoned development projects and costly drug eradication campaigns, and the hundreds, if not thousands, of wounded and dead Afghans and Americans.

Exactly 11 years earlier, on May 14, 2010, I found myself at Forward Operating Base Marja, one of the two bases we flew to this month, for the memorial service of my friend, Sgt. Josh Desforges. He had been killed two days before in a vicious firefight in a sector simply called “the Zulus.”

The whole platoon was there. Guys I hadn’t seen for what seemed like eternity. We hugged and laughed, even though the next day we knew we’d wear sunglasses so no one could see us crying.

That was the third month of Operation Moshtarak, the big show of President Barack Obama’s troop surge that was supposed to turn the tide of the war. We landed in February that year, securing Marja with the Afghan military’s earliest attempt at an army. A government was brought in and installed — a so-called government in a box, a select group of Afghan officials to replace the Taliban’s local leadership.

The Marja mission — with around 15,000 troops — was supposed to showcase this new but ultimately ineffective strategy.

Touching down again this month, there was little evidence that could explain why my friends, and so many Afghan civilians and soldiers, died here.

We rode in an Afghan Black Hawk helicopter with the call sign Eagle 6-4. Lt. Jack McCain, the son of late Senator John McCain, had in recent years helped train these Afghan pilots as a Navy adviser.

Helicopter supply missions in Helmand are exceedingly dangerous, and most trips to the bases in Marja are to pick up the dead and wounded. The aircraft are frequently shot at, and among the pilots, the Marja missions are spoken of with fear and dread.

It was the second day of a three-day cease-fire for the Eid-al-Fitr holiday, and the two helicopters were on a resupply mission, delivering live sheep, ammunition, potatoes, onions, milk and various other items to the men isolated on these bases with little more than rifles, machine guns and mortars. The sheep were bound and stuffed in grain bags, petrified, struggling to break free. The crew calmed the animals as best they could.

The Black Hawks departed from the Afghan base wedged between Camp Leatherneck and Camp Bastion, massive hubs used by the Americans and the British at the height of the war. Now they are basically just pillaged ruins aside from the still functional airfield. In 2019, when the Taliban overtook part of the camp, American jets had to bomb one of the warehouses where the insurgents had barricaded themselves. The building — or what’s left of it — still stands.

After the Kem bazaar run, we grabbed the next tranche of supplies and flew over the city, this time heading south to F.O.B. Marja, now known as Camp Nowruz. Marja is often referred to as a city, but it is really just a bunch of villages within opium-poppy fields atop an American agricultural project that looked like a well-defined grid from above.

From the window I could see the Koru Chareh bazaar, a pork chop-shaped village that we had assaulted in the early hours of the operation on Feb. 13, 2010. I could see the roof where two members of my team were shot at the end of that day, the distinct plus-shaped part of the roof clearly visible even through the smudged glass.

Cpl. Matt Tooker, my second in command, the team’s anchor and my close friend, had walked to the edge before he was shot twice in the arm. We had dragged him to cover, working to put on a tourniquet as I tried to assure him everything was going to be OK. He died a little over a year later in a motorcycle accident. The other Marine, who was shot in the chest, returned to Marja a few weeks later.

And there was the field where I said goodbye to Josh. The mosque where we were ambushed. The house where I told the team that Josh was dead. The patrol base we built, C.O.P. Turbett, named after the engineer, Cpl. Jacob Turbett, who was killed at the beginning of the assault, was gone along with any evidence of its existence. The parking lot and tents were once again a field, just as we had found it more than a decade ago, as if we had never been there.

Once more, I was wearing sunglasses so no one in the helicopter could see me crying.

We began the descent into F.O.B. Marja, its blueprint vaguely the way I remembered it. There was a new district center building, but the old skeleton of our base remained, the motor pool still distinguishable as was the spot of ground where we set chairs and a stage and the rifle tucked between boots for Josh’s memorial service. The buildings around it seemed almost completely destroyed: Years of shelling and firefights between the Taliban and American and then Afghan forces had taken its toll.

We landed as we had before, violently. The sheep were thrown off along with the food and ammunition. This time five soldiers left with us, their stay at the surrounded outpost having expired. Clustered in the back of the helicopter they took selfies, smiles wide. The aircraft crew passed them their Gatorades. They were ecstatic to get out alive.

One soldier, who declined to give his name, said little but only that this group had been at the base for the last two years. “It’s a dangerous place, and there’s no food,” he said later.

Banking up and into the air, Marja receded into the distance. I couldn’t help but think of the opening line of my friend’s eulogy for Josh — spoken 11 years ago just a few hundred yards from where the Afghan soldiers clambered aboard the helicopter. The platoon had assembled, uniforms dirty and well-worn, the day only getting warmer and the deployment far from over.

He began: “So how about that ride in?”

Many European leaders still see Russia as the principal concern.