A Wave of the Hand Sets Off Spain-Morocco Migrant Fight

Spanish officials say Morocco increasingly sees migrants as currency for financial and political gains after it let up to 12,000 flood into a Spanish enclave in North Africa over two days.,

CEUTA, Spain — Daouda Faye, a 25-year-old migrant from Senegal, was elated when he heard that Moroccan border guards had suddenly started waving in undocumented migrants across the border to Ceuta, a fenced-off Spanish enclave on the North African coast.

“‘Come on in, boys,'” the guards told him and others as they reached the border on May 17, Mr. Faye said.

And in they went — by the thousands.

Normally, Morocco tightly controls the fenced borders around Ceuta, a six-mile-long peninsula on Morocco’s northern coast that Spain has governed since the 1600s. But now its military was allowing migrants into this toehold of Europe. Over the next two days, as many as 12,000 people flowed over the border to Ceuta in hopes of reaching mainland Spain, engulfing the city of 80,000. 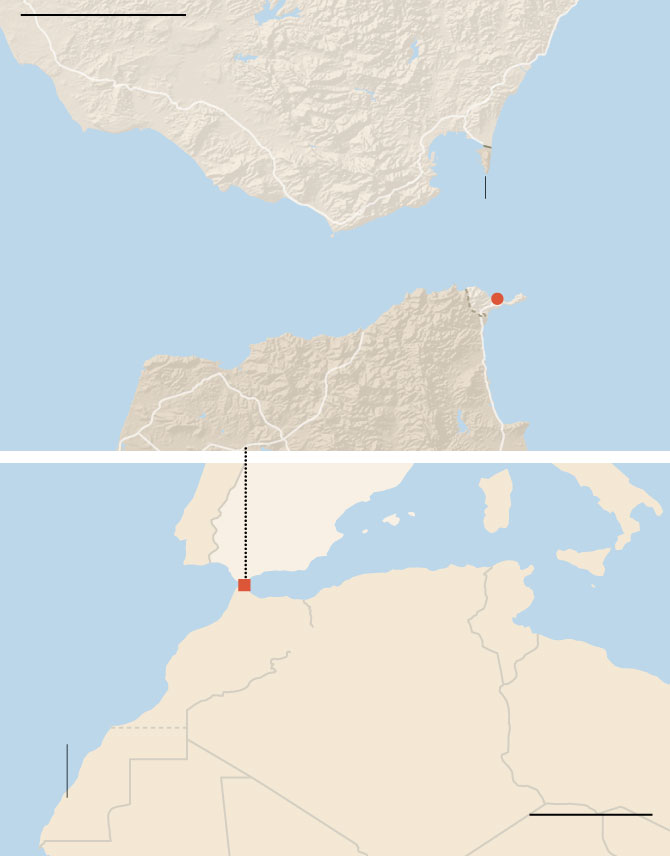 The crisis has laid bare the unique pressure point Morocco has over Spain on migration. Spanish government officials and other experts say Morocco increasingly sees the migrants as a kind of currency and is leveraging its control over them to extract financial and political prizes from Spain.

“It’s not acceptable that a government allows for attacks on their borders” because of disagreements over foreign policy, Pedro Sanchez, Spain’s prime minister, said on Monday.

Hours after the migrants began pouring into Ceuta, Spain approved 30 million euros, about $37 million, in aid to Morocco for border policing. The transaction was reminiscent of Turkey’s deal with the European Union under which it was paid to stem the flood of migrants onto European shores after the Arab Spring and decades of turmoil in Afghanistan.

For years, Morocco has been a staging ground for migrants and refugees coming from North and West Africa, seeking to start anew in Europe. As many as 40,000 undocumented migrants from other countries are in Morocco, according to the International Organization for Migration, a United Nations agency.

Moroccan security forces are often one of the last obstacles in an arduous journey, patrolling the land and water borders and taking back many deportees who escape into Ceuta and Melilla, another Spanish enclave on its coast, under an agreement between the countries.

But tensions between the two countries over migrants have worsened during the pandemic, which has crippled economies on both sides of the border. Morocco has already received an estimated 13 billion euros in development funds from the European Union since 2007 in exchange for strict border controls. Experts say it is seeking more money transfers this year.

Morocco’s interests and its tensions with Spain go beyond funding, however.

In April, Spain said it had allowed Brahim Ghali, a rebel leader at war with Morocco, to be hospitalized in mainland Spain with Covid-19. Mr. Ghali’s organization, the Polisario Front, has spent decades fighting the North African kingdom for control over the region of Western Sahara, which used to be a Spanish colony.

In early May, Morocco’s Foreign Ministry warned Spain that there would be consequences for helping the Polisario leader.

Jose Ignacio Torreblanca, a politics professor at the National Distance Education University in Madrid, said Morocco was now using its control over migrants at the border to pressure Spain to take its side in the Western Sahara conflict — following the lead of the Trump administration, which last year recognized Morocco’s claim of sovereignty over Western Sahara.

On Monday, Morocco’s Foreign Ministry did not respond to Spain’s accusation that it had used migration for leverage. “The origins of the crisis are well known, especially by the Spanish public,” it said in a statement, and did not elaborate further.

The situation has left migrants like Mr. Faye, a university student who had hoped to study in Paris, sleeping on a beach on Ceuta’s rocky shore, the Rock of Gibraltar visible off in the distance.

“They have used us as pawns,” he said.

Mr. Faye said he had been living as an undocumented migrant for a year in Casablanca when he heard in mid-May that the Moroccan border guards were allowing people to cross into Spanish territory. He packed his passport, computer and two pairs of shoes before taking a taxi to a point near the border.

From there, he said, Moroccan soldiers gave him some helpful advice by telling him to continue on foot.

By the morning of May 17, the start of the two-day influx, many others were arriving in Ceuta by sea.

Spanish rescue units scrambled to save babies as families were swept away by the currents while trying to swim around a border fence. Videos showed Moroccan border guards opening a gate as more migrants flowed in by land.

For those who did make it inside, many of the inundated shelters turned away the new arrivals, leaving many to fend for themselves on Ceuta’s beaches, ditches and even an abandoned prison. Spanish military units deployed to the enclave to restore order.

Braulio Varela Fuentes, who leads an aquatic rescue team with Spain’s Civil Guard, said reports began to arrive around 8 a.m. on May 17 that a group of migrants were swimming around a border fence. He arrived at the site to find seven people, mainly men.

But the numbers were growing. By about 2:30 p.m., there were hundreds in the water, including entire families with young children who could not swim.

“How could they throw themselves in the water with a baby?” Mr. Varela Fuentes said. He said two bodies of migrants were later found. They had likely drowned that day.

Spanish authorities deported about half of the migrants, mainly Moroccans, within the first hours over the objections of human rights groups. Minors may remain legally under Spanish law, along with asylum seekers.

And then there were those who managed to hide. They soon realized they were at a dead end.

John Scott, 25, from Liberia, said he had left his home in 2015, passing through Mali, Niger and Algeria before reaching Morocco. Now, he was in this small Spanish enclave with just a few large streets and without shelter, an even bleaker situation than the one he left.

“What kind of opportunity is this?” Mr. Scott asked, pointing to his sleeping place near a breakwater.

Juan Sergio Redondo, who leads the local chapter of Spain’s far-right movement, Vox, was alarmed by the situation for different reasons. While waves of migrants had entered Spain before, it had not reached these levels. The arrivals were altering the “Spanish” nature of Ceuta, he said.

“We’ve gone from being a city in the Mediterranean with an Andalusian character to one which has become like part of Morocco,” he said.

Last week, Vox planned a rally in Ceuta. It was quickly abandoned as thousands of counterprotesters from Ceuta’s Muslim community took to the streets. Many waved Spanish flags, appropriating a symbol often associated in Spain with the far right.

Hundreds banged pots, blasted bullhorns and clashed with police who chased them down the Ceuta’s alleyways with batons and rifles.

“These are the seeds of discord,” said Juan Jesus Vivas, Ceuta’s mayor. “This is not something to be played around with.”

Norimen Abdeselam Mohamed, a 15-year-old Spanish student at the rally, said she was angered that anyone would question her loyalty because of her Moroccan descent. She said she felt solidarity with the migrants.

“They are people who came for a job, and if you come here, we should welcome you,” she said.

At a beach down the street looking out toward the mountains in Europe, Halima Hassen, a Ceuta resident, drove up in her car. She had spent most of the day making tomato sandwiches — about 200 of them — to drop off to a group of new arrivals camped on the beach.

Away from the glare of the streetlights, the migrants were making their beds on the beach. A group of West Africans talked in English and French about what they had done before they arrived in Ceuta. One had worked in a beauty salon; another said he was an opposition politician in Guinea looking for asylum.

The next morning, Sabah Ahmed, a 59-year-old store owner, opened an empty home she owned so nearby migrants could shower. Because there were not enough bathrooms in the house, Ms. Ahmed asked the men to strip down on the roof and scrub with soap while someone showered them with a hose.

But Ceuta was small, she said. There was not enough room in the tiny enclave for everyone who wanted to come.

“I have to give them a chat,” she said. “I say, ‘We always will give you help. But here is my advice: In the long run, it’s going to be better if you go back to your home.'”

Covid Vaccine Card: What You Need to Know

Asia Struggles to Cast Off the Pandemic Despite its Early Lead