But the research, involving 2.53 million adults in Scotland, found that the vaccine’s benefits outweighed the small risks.,

People receiving the Covid vaccine made by Oxford-AstraZeneca had a slightly increased risk of a bleeding disorder, and possibly other rare blood problems, researchers reported on Wednesday.

The study found no increased risk of the blood disorders with the Pfizer-BioNTech vaccine.

The AstraZeneca vaccine is not authorized for use in the United States, but it has been authorized by the European Medicines Agency, the European Union’s top drug regulator, as well as many countries outside the bloc. But reports of rare clotting and bleeding disorders in younger adults, some fatal, led a number of countries to limit the vaccine’s use to older people, and a few to drop it altogether.

The new study found that the AstraZeneca vaccine was linked to a slight increase in the risk of a disorder called immune thrombocytopenic purpura, or I.T.P., which can cause just bruising in some cases but also serious bleeding in others. The risk was estimated at 1.13 cases per 100,000 people receiving their first dose, up to 27 days after vaccination. That estimate would be in addition to the typical incidence in the United Kingdom, before the vaccine came into use, which was estimated at six to nine cases per 100,000.

The condition is treatable, and none of the cases in vaccine recipients were fatal, the researchers said. They emphasized that the benefits of the vaccine far outweighed the small risk, and noted that Covid itself is far more likely than the vaccine to cause I.T.P.

But the researchers also wrote that even though the risks from the AstraZeneca vaccine were small, “alternative vaccines for individuals at low Covid-19 risk might be warranted when supply allows.”

It is not surprising to find I.T.P. in a few vaccine recipients, the researchers said, noting that small increases in the risk have also occurred with the vaccination for measles, mumps and rubella, and the shots for hepatitis B and flu.

In a commentary published with the study, experts on blood disorders said that I.T.P. could be difficult to diagnose and that the possible connection needed further analysis. But they wrote, “Nonetheless, the risk of vaccination-induced I.T.P. at the rate proposed seems to be far lower than the many risks associated with Covid-19 itself.”

The study in Scotland also found very small increased risks of arterial blood clots and bleeding possibly associated with the AstraZeneca vaccine. But the researchers said there was not enough data to conclude that the vaccine was linked to a rare type of blood clot in the brain called cerebral venous sinus thrombosis. Earlier this year, reports of those brain clots led some countries to suspend or limit the vaccine’s use.

The researchers said they could not rule out a connection to the brain clots, but there were not enough cases to analyze.

The brain clots are “as rare as hen’s teeth,” Prof. Aziz Sheikh, the senior author of the study, from the University of Edinburgh, said during a news briefing. 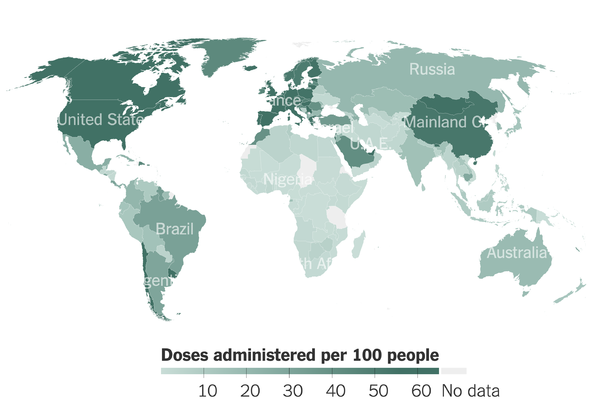 Tracking Coronavirus Vaccinations Around the World

More than 2.22 billion vaccine doses have been administered worldwide, equal to 29 doses for every 100 people.

Similar concerns have been raised about a rare disorder involving brain clots and bleeding, primarily in younger women, linked to the Johnson & Johnson vaccine, which is authorized in the United States and other countries. Six U.S. cases, including one death, led federal health officials to order a pause in the vaccine’s use in April. The pause was lifted after 10 days, and the vaccine was reinstated with labeling to warn consumers of the clot risk and the availability of other vaccines. Several more cases were identified later, and doctors were advised to avoid using heparin, a standard treatment, in these cases, because it can make the condition worse.

The clotting risk has led Denmark to decline to use either the AstraZeneca or Johnson & Johnson vaccines.

The AstraZeneca and Johnson & Johnson vaccines both use so-called viral vectors to carry genetic material into recipients’ cells, and some researchers have suggested that the vectors may lead to the rare blood disorders. Whether there is a connection is not known.

The authors of the Scotland study said they did not know if their findings on the AstraZeneca vaccine had any implications for the Johnson & Johnson vaccine, which they have not studied.

N.Y.’s State of Emergency Will End Thursday, as Will Takeout Alcohol