Miami Building Collapse Victims: Who They Were

The death toll has climbed to 18, with almost 150 people missing.,

When Champlain Towers South, a 13-story beachfront condo building in Surfside, Fla., partially collapsed on June 24, dozens of residents were trapped in an enormous pile of concrete and steel. The cave-in, in the middle of an otherwise ordinary warm summer night, set off a massive search-and-rescue effort to find survivors amid the ruins.

One teenage boy was pulled alive from the rubble early on, but his mother later died from her injuries. She would be the first official victim, and others would soon follow. A couple nearing their 60th anniversary, another couple married just weeks ago, a father whose greatest joys were his children, and a budding fashion graphic designer were among those confirmed dead.

As of Wednesday evening, the death toll had climbed to 18 — including two children — with 145 people still missing.

Here are some of their stories.

Stacie Fang was the first victim identified in the condo collapse. She was the mother of Jonah Handler, a 15-year-old boy who was pulled alive from the rubble in a dramatic rescue as he begged rescuers, “Please don’t leave me.”

Ms. Fang, who according to her LinkedIn page had worked since 2009 as a vice president for a company that organizes an annual event for retail marketers, was also pulled from the wreckage but pronounced dead at a nearby hospital.

“There are no words to describe the tragic loss of our beloved Stacie,” the Fang and Handler families said in a statement posted on Twitter by a local TV reporter.

At 92, Hilda Noriega was one of many longtime residents of Champlain Towers, having lived in a sixth-floor condo for more than 20 years. Her family said she was still active, but they had recently decided to sell her condo and have Ms. Noriega move in with her son and daughter-in-law. They had even begun showing the condo.

A few days before the collapse, Ms. Noriega went out with her family to celebrate Father’s Day. The last time they saw her was when they dropped her off at home, a moment that now haunts them, said Sally Noriega, Ms. Noriega’s daughter-in-law.

Sally said she and her husband, Carlos, who is chief of police in the nearby North Bay Village, rushed to the building when they heard about the disaster. As they surveyed the scene in that early-morning chaos, Ms. Noriega’s son stepped on something: It was a card addressed to his mother from her church friends.

On Wednesday, the family released a statement in which they said they had lost the “heart and soul” and “matriarch,” but would “get through this time by embracing the unconditional love Hilda was known for.”

In an Instagram post, Phil Ferro, the chief meteorologist on WSVN Channel 7 in Miami, confirmed that Gladys Lozano, his godmother, and Antonio Lozano, his uncle, had died in the collapse. For days, Mr. Ferro had been reporting on weather conditions affecting the search-and-rescue operation.

“My godmother was probably one of the most beautiful people in the world that I’ve ever known,” Mr. Ferro said in a WSVN interview. “For any occasion, she would cook. They would be the life of the party. My uncle Tony was very much quick with a joke, and they were truly the kind of people who whenever you needed, they were there for you, for the entire family.”

He added, “They were found together, and so we’re all just going with the thought that they never knew what happened,” he said. “They fell asleep, and that was it.”

Manuel LaFont, a businessman who worked with Latin American companies and left behind a 10-year-old son and a 13-year-old daughter, was described by his former wife as “the best dad.”

Adriana LaFont said her ex-husband was a loving and devoted father who had a passion for baseball — one he had inherited from his Cuban parents. Mr. LaFont had played the sport when he was young and coached his son’s team, never missing a practice or a game.

“He’s the most genuine person I ever met,” she said.

Their children were with Ms. LaFont when the building collapsed.

Leon Oliwkowicz, 80, and Cristina Beatriz Elvira, 74, were from Venezuela and had recently moved to Surfside, according to Chabadinfo.com, which said they were active in the Orthodox Jewish community in greater Chicago, where one of their daughters lives.

In a note penned by the elder Mr. Bermudez in Spanish, he wrote: “My Luiyo. You gave me everything … I will miss you all of my life. We’ll see each other soon. I will never leave you alone.”

The younger Mr. Bermudez was a fashion graphic designer, according to his website. On his Instagram biography he described himself as “Just a guy with big dreams and ideas. Creative in every way and looking to collaborate with artists. Making my way up. Blessed.”

A teacher from Mr. Bermudez’s high school in Puerto Rico, Jose J Ortiz Carlo, described him as an example of courageousness. “From his wheelchair and as a lifelong battler of muscular dystrophy, Luis taught us more about COURAGE, PERSEVERANCE, and about how to make the best of one’s LIFE than any book, any lesson or any theory,” he wrote in a Facebook post. “He was the embodiment of what it means to be a true SILENT WARRIOR.”

Mr. Bermudez lived with his recently wed mother and new stepfather, Frank Kleiman, 55, just down the hall from Mr. Kleiman’s mother, Nancy Kleiman, who was among the missing. His brother, Jay Kleiman, was visiting the family and staying with their mother the night of the collapse. He is also among those still unaccounted for.

Frank Kleiman and Ms. Ortiz ran a small mail service business in Miami, according to Alex Garcia, a close friend.

“He always kept his chin up. He wasn’t judgmental. He was the kind of guy you could share anything with,” Mr. Garcia, 55, said. “He was one of my best friends, the best man in my wedding and we traveled together.”

They had just seen each other on Father’s Day, four days before the collapse.

Officials identified Michael David Altman, 50, as among those killed in the collapse.

Marcus Joseph Guara, 52, lived with his wife, Ana, and their two daughters, Lucia and Emma, all of whom remain missing. He was remembered as a kind and generous man, a godfather to his close friend’s twin 9-year-old boys and a fan of hard rock music.

Jose Dezarraga, who grew up with Mr. Guara, said much of their childhood was spent outdoors, running and swimming or biking and playing soccer. The two also bonded over a shared love of the rock band Kiss.

“His mom took us to our first Kiss concert and we went again to see them in Tampa two years ago,” Mr. Dezarraga, 53, said. They spent last Christmas together, and Mr. Guara gave bikes to the twins.

“I had just talked to him about two weeks ago,” he said. “What I did not know at the time is he and another friend were planning a surprise visit.” 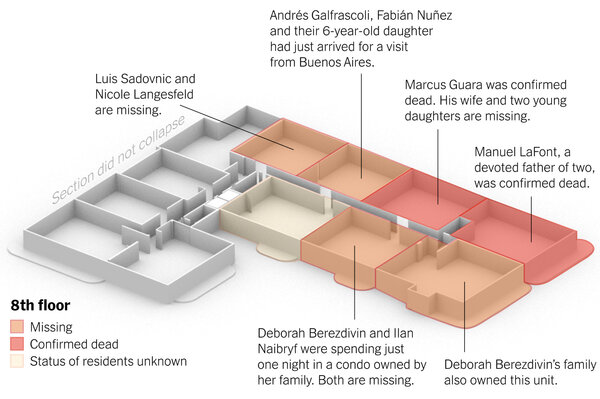 Floor by Floor, the Missing People and Lost Lives Near Miami

At least half of the 135 apartments of the Champlain Towers South in Surfside, Fla., collapsed in the early hours of June 24. See the apartment locations of the victims and those still missing.

Carl Heastie: The Man Who Would Oversee Cuomo’s Impeachment