Biden Celebrates Infrastructure Win, Even if Harder Victory Is Ahead

“Finally! Infrastructure week!” the president declared with a broad smile.,

President Biden celebrated the House passage of a $1 trillion bill to repair and modernize the nation’s aging infrastructure, a key legislative goal.

We did something that’s long overdue, that long has been talked about in Washington, but never actually been done. The House of Representatives passed an Infrastructure Investment and Jobs Act. That’s a fancy way of saying a bipartisan infrastructure bill, a once in a generation investment that’s going to create millions of jobs, modernizing our infrastructure, our roads, our bridges, our broadband, a whole range of things, to turn the climate crisis into an opportunity. And it puts us on a path to win the economic competition of the 21st century that we face with China and other large countries and the rest of the world. It’s going to create more jobs, good-paying jobs, union jobs that can’t be outsourced, and they’re going to transform our transportation system with the most significant investments in passenger rail, the most significant investment in 50 years, in roads and bridges the most significant investment in 70 years, and more investment in public transit than we’ve ever, ever made. We’re doing so much with this legislation. It’s going to make it easier for companies to get goods to market more quickly and reduce supply chains’ bottlenecks, now and for decades to come. You know, and according to economists, this is going to ease inflationary pressure, not increase it, ease inflationary pressures by lowering costs for working families. It’s going to create jobs, replacing lead and lead water pipes. So every American, every child can drink clean water. And for all of you at home who feel left behind and forgotten in an economy that’s changing so rapidly, this bill is for you. The vast majority of the thousands of jobs that will be created don’t require a college degree. There’ll be jobs in every part of the country. Red states, blue states, cities, small towns, rural communities, tribal communities. This is a blue-collar blueprint to rebuild America. 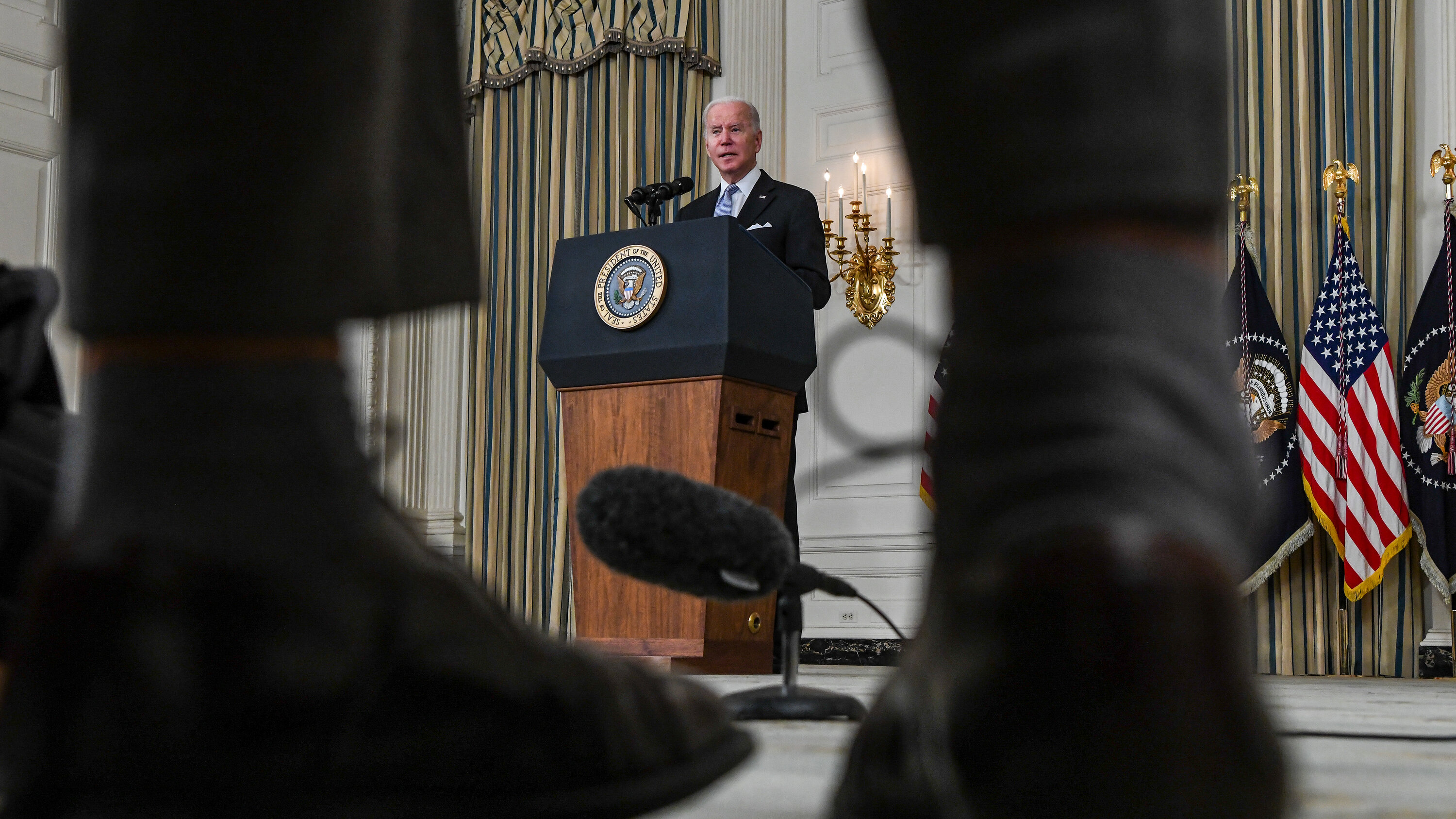 President Biden celebrated the House passage of a $1 trillion bill to repair and modernize the nation’s aging infrastructure, a key legislative goal.CreditCredit…Kenny Holston for The New York Times

President Biden celebrated the passage of the $1 trillion infrastructure bill on Saturday, declaring — just days after an electoral drubbing for his party — that he had made good on two key promises of his campaign: reviving the economy and getting the nation vaccinated.

Shortly before midnight on Friday, the House gave final approval to the package, the largest single investment of federal resources into infrastructure projects in more than a decade, on a 228-to-206 vote.

But for Mr. Biden on Saturday, there was a clear sense of regret that his victory did not come a few days earlier, when it might have made a difference in the off-year elections on Tuesday in which his party fared poorly, an outcome that he acknowledged reflected public frustration with a democratic process that seemed in perpetual gridlock.

“The American people have made clear one overwhelming thing, I think,” he said, with Vice President Kamala Harris at his side. “All the talk about the elections and what do they mean. They want us to deliver.”

Mr. Biden cast the victory — which he achieved with the support of 13 House Republicans, who proved crucial because of key defections from his own party — as critical to putting Americans to work on long-neglected projects. But he also described it as central to his strategy for competing with China, from the money for charging stations for electric vehicles — an investment Beijing made years ago — to bringing broadband internet service to remote and underserved communities.

“We did something that is long overdue, that long has been talked about in Washington but never actually been done,” he said.

“When we came to office, we were told virtually by everybody, ‘You can’t get this economy moving,'” he said. “Remember when they told me there is no way that I could get, you know, 2 million shots a day into people’s arms in the beginning? There’s no way to get to 200 million. No way to get the vaccine. No way, no way, no way.”

“I’m not criticizing people who said that,” he added.

Over the summer, the president had hoped this pivotal moment would be accompanied by the simultaneous passing of the even larger social safety net and climate change bill that is the top priority of his party’s progressive wing.

In his final efforts to assemble votes for the infrastructure bill, he had asked skeptical members of his party on Friday to trust that he had cut quiet deals that would assure passage of some form of the social policy bill the week of Nov. 15. That is when Congress is scheduled to be back from a weeklong recess.

Asked on Saturday whether he had gotten assurances from moderates in the party that they would also vote for the sprawling social policy bill — with its funding for universal preschool for 3- and 4-year-olds, paid family leave, child-care tax credits and extensive climate change programs — Mr. Biden refused to give details.

“I’m not going to get into who made what commitments to me — I don’t negotiate in public. But I feel confident.”

To win over votes later this month, Mr. Biden added some elements intended to appeal to Democrats in parts of the East Coast and California — including wealthier taxpayers. Changes enacted during the Trump administration made it impossible for taxpayers in those states to deduct from their federal taxable income more than $10,000 paid in state and local taxes. The new deduction, at least as the legislation stands now, would raise that limit to $80,000.

Before the House will take that up, however, moderates are demanding an independent assessment of the bill’s true cost. That will take until at least the middle of the month — and may well decide its fate, or whether it would be even further scaled back.

Once the Build Back Better act is passed — or not — there is a third element of Mr. Biden’s economic revival effort that he has spoken about rarely in recent months — but is perhaps the most radical in its vision of how the government invests in future technology. It is the so-called China bill, essentially a package of industrial-policy investments, including more than $50 billion in the semiconductor industry, research in quantum computing and artificial intelligence, and a series of other technologies that essentially mirror Beijing’s “Made in China 2025” initiative.

But when asked about the bill on Saturday during a speech that had turned into a lengthy news conference, Mr. Biden declined to say when it would come up in the House. It has already passed the Senate by a strong bipartisan majority, a testament to how competing with China’s military and technological investments is one of the few issues that brings Republicans and Democrats together. But the bill’s focus on technology does not give it the same political appeal, for Mr. Biden or members of the House, that rebuilding bridges and roads holds.

Mr. Biden also passionately defended his administration’s consideration of payments to migrants who were separated from their children at the border — and in some cases were never reunited — under President Trump’s “zero tolerance” policy.

On Wednesday he had said that he would not approve payments of upward of $450,000 to the families of those separated, a figure reported to have been debated inside the Justice Department, which has to handle cases coming out of the Trump-era policy. But on Saturday, he said that his objection had been to the amount of the payments, not to the concept of compensating parents.

“If in fact, because of the outrageous behavior of the last administration, you coming across the border, whether it was legal or illegal, and you lost your child,” Mr. Biden began and then stopped himself.

“You lost your child,” he repeated, raising his voice. “It’s gone. You deserve some kind of compensation no matter what the circumstance. What that will be I have no idea. I have no idea.”

Schools Are Closing Classrooms on Fridays. Parents Are Furious.