Police search the desert trying to track down the poachers selling Conophytums to collectors worldwide, threatening to wipe out rare plants in the wild.,

STEINKOPF, South Africa — On a moonless night in the desert in the far west of South Africa, Avrill Kaffer had just finished making a sale when vehicles with flashing lights emerged out of the darkness and an officer from the Stock Theft and Endangered Species Unit leapt from behind a nearby bush, ordering him to the ground.

By the time Mr. Kaffer realized he had been set up, he was already in handcuffs. As he looked on, police officers proceeded to open up the eight large cardboard boxes he had brought with him.

Inside, they found thousands of small, brown, dumpling-like plants — Conophytums, native to this part of Africa — evidently only recently dug up.

Conophytum, a genus of flowering plants that consists of over 100 species — including several listed as endangered — are the latest victims of a global wave of succulent poaching driven by surging demand from collectors and enthusiasts around the world, but especially in China and Korea, experts said.

South Africa is home to around a third of all succulent species, according to the World Wildlife Fund, and experts say that this wave of poaching poses a severe threat to biodiversity.

“Conophytums are the big thing now” said Captain Karel Du Toit, the officer behind the sting operation that led to Mr. Kaffer’s arrest. Capt. Du Toit, himself an avid Conophytum admirer, said he used to spend most of his time investigating cases of stolen livestock, but since 2018, fighting succulent poaching had become a full-time job.

“Eighty percent of those are plant cases” he said back in his office, pointing to a stack of case files piled on the floor beside his desk. “The problem is getting huge.”

Once thought of in South Africa as plants for the poor, succulents have come into fashion internationally in recent years, valued for their quirky, sculptural forms and the relatively little maintenance they require. A search for #succulents now brings up over 12 million hits on Instagram.

The Covid-19 pandemic has boosted an already buoyant houseplant industry, with garden centers reporting a sharp rise in indoor plant sales since lockdowns were first imposed in many countries in 2020.

The pandemic has also changed the way succulent poachers operate, law enforcement officials said. A few years ago, the people Capt. Du Toit and his colleagues were arresting were almost all foreign nationals — primarily Chinese and Korean passport holders. But since the pandemic forced restrictions on travel, foreign buyers have been hiring locals to do the poaching.

“They supply the local people with GPS readings for spots where the plants grow,” said Capt. Du Toit.

This shift has brought the country’s conservation authorities into conflict with a growing number of young, unemployed people who see in these plants the chance of an escape from grinding poverty.

“It’s the most stupid thing I’ve ever done,” said Mr. Kaffer after his arrest, while two officers counted the Conophytums he tried to sell, shoveling them into evidence bags. The first box alone contained some 1,424 plants.

A former diamond miner, Mr. Kaffer, who is 40, said he had been out of work for more than a year and was struggling to support his family. South Africa’s unemployment rate has risen to almost 33 percent during the pandemic.

Typically, those convicted are offered a choice between paying a fine and receiving a suspended sentence or, alternatively, serving a short jail term.

At botanical gardens and greenhouses in the Northern Cape and Western Cape provinces, where the poaching epidemic is most severe, botanists are struggling to deal with a massive influx of succulents confiscated from poachers. With too many to replant in the wild, and faced with the risk that doing so might contaminate the remaining wild populations, authorities are now hoping to keep as many alive as possible until a long-term decision is made about what to do with them.

“I’ve literally got case after case” said one botanist in Cape Town who helps take care of confiscated succulents and serves as an expert witness for prosecutors. The man asked to remain anonymous, citing recent threats received by a colleague. 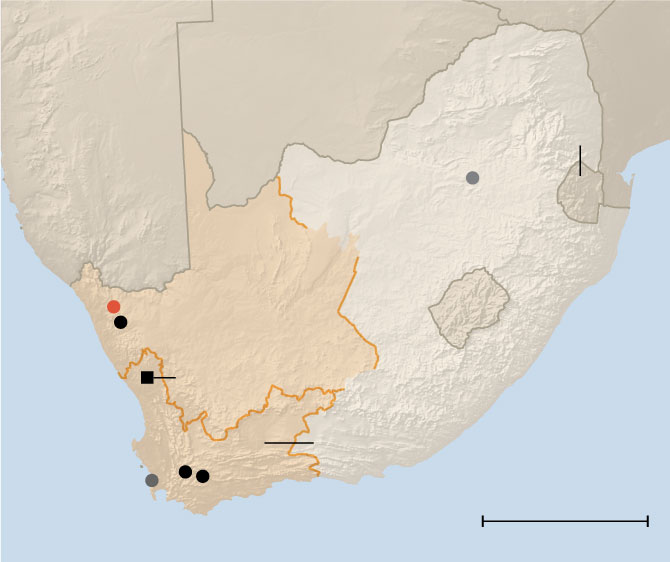 At his storage facility, where he said he has been receiving about 2,500 poached Conophytum per week since the start of the year, trays full of succulents lay along a series of metal tables, each section corresponding to a different police bust.

One table held a mix of haworthias, adromischus and gasterias, other types of succulents, seized from a pair of Czech poachers in 2019. Beside it lay trays of Conophytums confiscated from a Korean poacher who turned out to be on the run from authorities in California, where he faced charges of stealing more than half a million dollars’ worth of Dudleya farinosa plants.

“These ones were caught in the mail,” said the botanist, indicating several boxes of miniature Conophytum comptonii plants. “It’s just insane, people cannot get the plants fast enough.”

Stemming the poaching tide is a major challenge. The South African government lacks the personnel to police the vast open spaces where the Conophytums grow. Besides, plant crime specialists acknowledge that few police or customs officers can even identify a Conophytum, let alone differentiate a nursery grown one from a wild harvested one.

In case wild populations are wiped out, the South African National Biodiversity Institute is aiming to collect stock specimens of rare species to keep in cultivation.

“The demand for rare, wild harvested plants is skyrocketing, and many of these species, especially Conophytums, only occur in very small localized populations, so they could be collected to extinction in a couple of visits by poachers” said Ismail Ebrahim, a project manager at the Institute.

Plant poaching is not a new phenomenon. But the internet has blown the market wide open, said Carly Cowell, a South African scientist now based at the Royal Botanical Gardens, Kew, in England, who was involved in a recent project that used artificial intelligence to track the illegal online plant trade.

“The internet is a major, major game changer” she said. “We found there’s a huge online trade in plants.” Many buyers of illegally harvested plants did not appear to know they were breaking the law, she said, adding that “people are quite ignorant or naive about what constitutes the illegal plant trade.”

A recent study by the Convention on International Trade in Endangered Species, an international treaty organization that combats the illegal wildlife trade, found some 365 endangered medicinal plants being sold openly on Amazon and eBay.

Dr. Cowell said that addressing the problem is made harder by a phenomenon known as “plant blindness”– the human tendency to see plants as inherently less important than animals.

Michelle Pfab, an official at South Africa’s biodiversity institute said that a lot of nonprofit groups focus on endangered animals because it’s easier to raise funds for “charismatic” species.

“You use pictures of orphans and cute babies and it’s so easy to get donations,” she said. “It’s just so difficult to do that with plants.”

Ms. Pfab said she was frustrated that while the number of poaching arrests was increasing, few of the major players were being apprehended.

“Mostly it’s the foot soldiers who get caught, the poor people trying to put food on the table,” she said.

She argues that South Africa will struggle to contain the poaching wave until the species in demand become more readily available from legal sources such as nurseries. This could take time.

“If you start from scratch with a packet of seeds you won’t make a cent for four or five years,” said Minette Schwegmann, the owner of a large succulent nursery in Robertson, east of Cape Town.

Ms. Schwegmann said she regularly receives orders for tens of thousands of mature Conophytums. When she replies that she can’t provide those quantities from her nursery, some prospective buyers ask why she can’t simply dig them up in the wild instead.

Théoneste Bagosora, a Mastermind of Rwanda Genocide, Dies at 80

Theoneste Bagosora, a Mastermind of Rwanda Genocide, Dies at 80

Wole Soyinka Is Not Going Anywhere