In Turkey, an Exhibit Meant to Highlight Kurdish Suffering Provoked a Furor

A recent art show in a major Kurdish city in Turkey aimed to uplift a region crushed by years of conflict. It ended up serving as a reminder of how toxic the subject of Kurds remains in Turkey.,

A recent art show in a major Kurdish city in Turkey aimed to uplift a region crushed by years of conflict. It ended up serving as a reminder of how toxic the subject of Kurds remains in Turkey.

DIYARBAKIR, Turkey — Dozens of brightly painted coffins marked with the initials of dead Kurdish civilians were laid out on the upper battlements of an ancient fortress. A wall of street signs bearing the names of other victims and a towering pile of rubber shoes recalled the thousands killed or imprisoned during decades of conflict.

The installations formed part of a recent art exhibit in Turkey’s largest Kurdish city, Diyarbakir, that the organizers hoped would uplift a region crushed by years of debilitating strife. Instead, the show came under furious attack from Turks and Kurds alike, and the government closed it down early — a reminder of how toxic the subject of the Kurds remains in Turkey.

“As a Kurdish artist, I wanted the audience to see and confront the harsh facts,” said the artist at the center of the uproar, Ahmet Gunestekin. “I wanted visitors to come face-to-face with the tragedy of the people of this region.”

The fighting between Turkish government forces and Kurdish separatists reached Diyarbakir in 2015, leaving the warren of narrow streets in its historic old district of Sur in ruins. Since then, the city has lived under tight police control as the Turkish authorities threw local Kurdish politicians and activists into prison.

The city’s chamber of commerce, which organized the exhibition, had hoped it would give Diyarbakir a much-needed boost by attracting visitors and filling hotels. The organizers chose Mr. Gunestekin because he was internationally known, and because his body of work honors the country’s Kurdish minority. Also in his favor: He had long been supported by people close to Turkey’s governing party.

The show, “Memory Chamber” — a combination of painting, textiles and sculpture — included political art and video installations that recalled the suffering of the Kurds and other minorities throughout decades of oppression under Turkish rule.

The uproar over it was less about the quality of the art and more a reflection of how polarized Turkey has become under President Recep Tayyip Erdogan.

When he first came to power nearly two decades ago, Mr. Erdogan quietly encouraged more cultural freedoms for Kurds, especially in media and publishing, and in 2013, he supported a peace process with Kurdish separatist rebels. But since 2015, when the peace process broke down, he has presided over the bombardment of Kurdish cities and a ruthless crackdown on Kurdish politicians and activists.

The response to the art show, which opened in October, was bigger than expected in many ways — a celebrity-filled opening, large crowds and full hotels. But it also brought a storm of criticism from all directions, including from Suleyman Soylu, Turkey’s interior minister.

He said that the exhibit expressed sympathy for terrorists, a term the government increasingly uses to describe its political opponents. And he suggested that Mr. Gunestekin had been used.

“This is the first time I’m witnessing terror use art,” Mr. Soylu said.

Mr. Gunestekin counts among his friends former ministers and advisers of Mr. Erdogan. That cachet, along with his commercial and financial success, has allowed him to dare to go where other Kurdish artists cannot.

But this was not the first time he had met with censure, and he took the backlash mostly in stride.

Much of his artwork reflects his personal story, but he has increasingly turned to creating starkly political pieces.

Mr. Gunestekin grew up in the nearby town of Batman and later in Diyarbakir, brought up by an Armenian stepgrandmother who was an orphan of the genocide. He said he was influenced by the multiethnic craftsmen in his childhood neighborhood, by years of roaming Kurdish villages and listening to storytellers, and by his mentor, the Turkish literary giant Yasar Kemal. 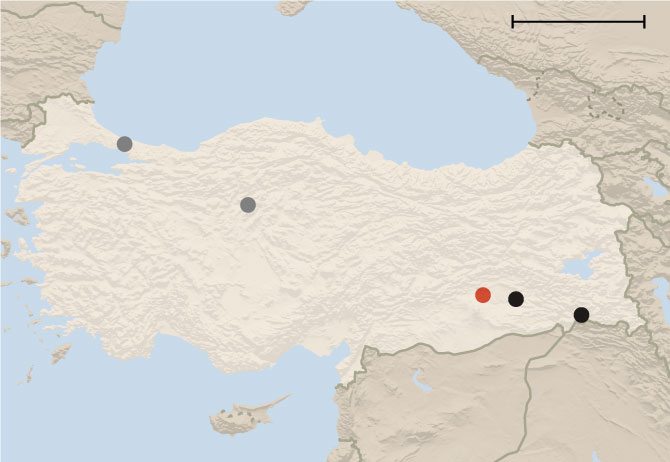 Two events were dominant in his mind in preparing for the recent show, he said. The first was the killing of 34 Kurds in 2011 when Turkish military jets bombed a group of smugglers crossing the border from Iraq near the village of Roboski. The other was fighting between Kurdish rebels and Turkish government forces in the old district of Diyarbakir in 2015.

A wall of street signs records the names of victims who disappeared or whose deaths were never investigated. Another installation was made from debris retrieved from the rubble of destroyed homes in that old district, spray-painted gray and mounted on a wall.

Video installations explored the loss of the Kurdish language, which Turkey banned for many years. In one, actors pronounce Kurdish letters that have no equivalent in the Turkish alphabet. In another, two men beat the letters written in chalk on a blackboard with leather straps until they disappear.

Mr. Gunestekin is not the only contemporary artist to grapple with these themes, but his exhibition was by far the largest and most prominent in Diyarbakir in the history of the conflict.

That conflict at the heart of the art show has stretched for more than three decades and left an estimated 40,000 dead, most of them Kurds. It pitted the separatist Kurdistan Workers’ Party, or P.K.K., against the Turkish state.

The pro-Kurdish Peoples’ Democratic Party, or H.D.P., a legal political party that shares much of the P.K.K.’s political platform, is regularly accused of terrorism for its ties to the militants, and the Turkish authorities have removed many of its elected representatives from their positions and imprisoned them, along with dozens of journalists and activists.

A recent political shift in Turkey was evident at the opening of the exhibit. An alliance of Turkish opposition parties, formed about three years ago to oust Mr. Erdogan, has been cooperating with the H.D.P. with the aim of combining their voting power ahead of elections in 2023.

The most notable guests at the opening were opposition figures, including Ekrem Imamoglu, the mayor of Istanbul and a presidential hopeful, and Mithat Sancar, a leader of the pro-Kurdish H.D.P.

Young Kurds demonstrated their displeasure by hurling one of the metal coffins from the battlements, apparently to protest that the exhibition did not go far enough to recognize all of those who lost their lives.

But the greatest storm swirled on social media, where Mr. Gunestekin engages readily on Instagram with his one million followers. Socialites were criticized for posing for selfies in front of monuments to suffering, as were guests who danced at a reception.

For some, Mr. Gunestekin represents what they dislike about Mr. Erdogan’s rule — the enrichment of people with party connections.

Mounting such a show would have been impossible for most Kurdish artists, one local artist said. Many in Turkey have been imprisoned for making political comments.

The work of local Kurdish contemporary artists is much more guarded, a sign of the self-censorship that most artists have been forced into.

Some local townspeople said they had no need for a “Memory Chamber” because they were still experiencing oppression by the Turkish government.

“We have lived what he tries to say,” said Nusret, 30, a barber, who gave only his first name for fear of repercussions from the government. “Our pain did not pass yet. What is the point of reinforcing our pain?”

But at the same time, there was no doubting the enthusiasm of many who visited the exhibition over the two months it was open, with lines forming on the weekends.

“I walked around with a lump in my throat,” said Pinar Celik, 38, a teacher from Ankara. “This is an artist who grew up in our culture and brought us face-to-face with issues that we were trying to cover up or forget.”

Many said they did not fully understand the work, but they recognized the Kurdish imagery and the traditional use of bright colors.

On the battlements, a Kurdish woman, Yildiz Dag, looked out over the multicolored coffins and uttered a single word: “oppression.”

“We are saddened to see them,” she said. “But it is good to show this, so it does not happen again.”

Saudi-Led Airstrikes Kill Scores at a Prison in Yemen